These are difficult times, indeed. Our major offensive against the Wall-Eye has failed, and our forces are in retreat. The brave men and women gave their all, but they were simply no match for the diabolical cunning of these cruel, merciless creatures.

The assault began when the 5th Regiment, made up mostly of out-of-work circus performers, rounded Bulbous Bluff. These 23 men, women, and monkeys hefted their pitchforks and rolled-up Yo-Yos and stepped past the big rock that looks like Gilbert Gottfried ready for anything.

But what they encountered was not anything. It was something. Something horrible. Hundreds of ravenous Wall-Eye launched a counter offensive, leaping into mouths hanging open in shock, and burrowing their way through our soldiers’ soft, fleshy bodies. The bluff was awash in blood before an organized retreat could be called for, and only seven of our men and women (none of the monkey’s made it) survived.

Not content to obliterate the Fighting Fifth, the Wall-Eye pressed their advance, forcing us to abandon Glassy Glade, Mellow Meadow, Oddly-Shaped Oasis, and about a third of Trenton, New Jersey. We apologize to the civilians abandoned in this time of chaos, and hope your new overlords butcher you all swiftly in the name of common decency.

All humans should know that this is but a single battle. Or rather, a bunch of battles all sort of connected. It is not the war. We will prevail in our struggle. If only because our opponents do not have opposable thumbs. 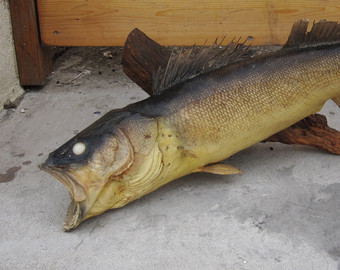 One of the foul demons an instant before it bit the head off of little Jimmy Skateboard–mullet and all.