Sometimes. Sometimes they’re easy. I have written books and short stories based on a title that popped into my head., bringing with it an entire story. Dr. Fell and the Playground of Doom (pre-order it on Amazon today!) was easy. Although my original title was simply Dr. Fell. The publisher added ‘and the Playground of Doom’ and I at first hated it but now I love it.

But sometimes they are hard. Book 2 is hard, and it doesn’t have a title yet. This is even though I’ve turned it in to the publisher and just today got their notes and am excited to dive into a second draft–all without a title.

Book 3 is easy. The title came first, and it took me a bit to wrap the story around everything the title promised. And I’ve been streaking through the writing process ever since (I wrote over 33,000 words in January!).

What do you want a title to say? What is its purpose? As a writer who spends a lot of time locked up in his little room with his keyboard, a cat, and some old Star Wars toys, I thought a title should be what the book is about. That’s why my first book was called Dr. Fell. It is about a small town where Dr. Fell arrives and then all Hell breaks loose. My publisher had other ideas. They thought the title should grab the potential book-buyer’s attention. They thought ‘Dr. Fell’ didn’t do that, because nobody knew who he was, so who cares. So they added ‘…and the Playground of Doom’ and presto chango! Now it nabs your attention.

“Ooo! A playground of doom? I must read about that at once!”

It also helps that the Playground of Doom shows up quite early in the book and is a focal point of the story. It works.

I’m currently reading Omega City by Diana Peterfreund. It is good so far. A fun read with fun characters, fun puzzles and conspiracies, and some other fun stuff. I like the book, despite what I’m going to be writing in a moment. I plan in finishing the book, which is a big thing for me.

The problem is, Omega City doesn’t work as a title. At least not for me.

I am currently only 70 pages into the story (the book is 318). The back of the book reads, in part “…Gillian sets off into the ruins of a vast doomsday bunker deep within the Earth.” Later on the back cover it reads “Now Gillian and her friends must race to explore Omega City and find the answers…”

So OK, it looks like much of the story revolves around an adventure inside this totally awesome Omega City.

I’m on page 70 and we’re not there yet. We don’t even know it exists. The characters are finding clues and not sure what’s going on. One of the clues mentions the word ‘Omega’ and they don’t know if that is important. Omega means last, so maybe it refers to the last of something?

No, it refers to the friggin’ lost city. Duh. Get on with it.

See, I read the back of the book. I know they’re going to find Omega City and go adventuring in it. So I’m twiddling my thumbs waiting for them to get there. Why create a puzzle for your audience of the title of the book gives the puzzle away? I hate being smarter than the characters, and right now anyone actually reading the book is automatically smarter than the characters by virtue of knowing the title of the book.

Cheating and skimming ahead, it looks like the characters find Omega City (but don’t yet know that’s what it is called) around page 100. Between now (page 70) and then (page 100) they are following a series of clues, not sure exactly what they’re looking for.

That’s going to be a frustrating 30 pages.

I wonder if the author had this title from the start, or if it was given to her by her editor/publisher? If anyone knows Diana Peterfreund, ask her for me, will you?

Meanwhile, if the back cover copy and title didn’t give it away enough, here’s the cover art. 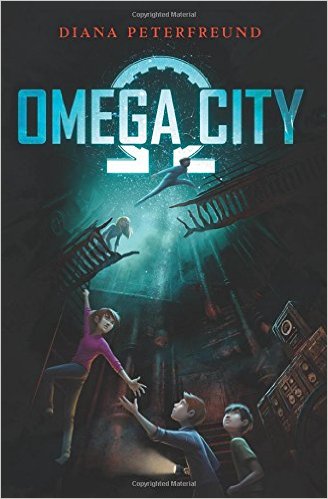 To recap. I’m on page 70 and there is nothing even resembling that image yet. Sure looks exciting. Somebody wake me when they reach the underground bunker.